Almost 2 weeks ago we started to move into our home on wheels, though it was not quite ready for prime time. The “slight” damage that the previous owner had caused was to be taken care of at a specialized RV body shop in Palm Desert (which is next to Palm Springs) and they were so kind to let us stay in the coach while the repair work was being performed. At times this proved challenging, particularly because we did not have water and sewer connection (but we had electricity). So we could not fully enjoy our on-board facilities, but instead had to use the shop rest room, which got the job done, albeit not very convenient. We’re nevertheless very thankful for the opportunity and it turned out as a blessing, since the shop owner was there with plenty of advice and help to get us RV-newbies going!

So once we were in the coach, we immediately started cleaning it from top to bottom and it needed it badly. We also found some problems that should be addressed pretty much right away. First, there was an unpleasant odor from the sewer part of the coach, probably because it hadn’t been used for a number of weeks and those “things” can get smelly if they become stagnant. With the advice from our new friends at the shop, we dumped some appropriate environmentally safe chemical in there and the smell dissipated almost completely within a day – yay! 🙂

The next item on the list were the automatic entry steps – they had stopped working all of a sudden and were stuck half way in. One night I decided to investigate further since I saw a cable hanging down behind the motor and thought that this could be the culprit (which it of course wasn’t – that would have been too easy ;). But my fiddling around got the attention of the shop owner and soon we were both deep into trouble shooting mode, checking the fuses, lines, power to the motor etc. All checked out, but the motor and gears didn’t turn. So I crawled under “the beast” and unbolted the motor. 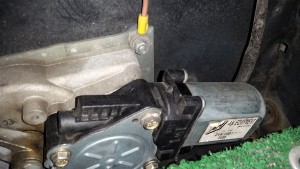 The motor for the automatic entry steps!

From the outside it looked fine, but running power through it yielded no movement… motor fried? I didn’t think so, because from my early exploration into all kinds of technical things as a teenager I knew that electric motors don’t burn up that easily… maybe the contacts were dirty, or a cable inside was lose. So I opened up the motor and gears and took it all apart. Contacts were clean, but I noticed that the drive shaft was very hard to turn, up to a point – then it all of a sudden turned easily. Hooked it up to power and the motor ran like a champ. So I put it all back together and guess what, the stairs retracted. But the joy was short lived because now they wouldn’t come out. So I took the motor assembly off once more, only to find that the whole thing had seized up again. Soon the shop owner suggested that the gear inside probably had worn out and even though it did not look bad on visual inspection, it was enough to cause the gears to seize up when torque was applied. But overall, this diagnosis wasn’t for nothing, since a new motor assembly could be found on the internet for a very reasonable 60-80 bucks… much less than having to buy a whole new automatic step. Let’s hope replacing the motor assembly is all that’s needed!

And finally, our big one: while we were staying inside, we noticed a very strong plastic-y smell one day and it turned out it was part of the repair work they were performing on the back-bumper. But the shop owner was stumped why so much of the fumes had entered the living space as our windows and vents were closed at the time. After some investigation, he found that the seals around the cover of the motor, which also doubles as the base of the bed were old and had worn out, so that fumes could easily enter the bedroom. This was also concerning because during driving or generator use, exhaust fumes could equally enter and actually create a very dangerous situation with carbon monoxide inside the coach. What to do? Reseal everything! 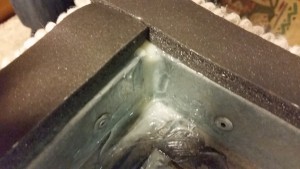 Easier said than done, because it took us almost a full day to take the bed base / motor cover apart, scrape off all the old seals, clean and reapply new seals (as well as adding a brand new carbon monoxide detector in the bedroom, just in case). But we got the job done, again with the help of our new friend, the shop keeper, who even sealed some additional areas with a fancy glue gun that looked like it could have been the weapon of choice for Buzz Lightyear! After it was all over, we were much more insulated from the shop smells – success!

Even though it has been a lot of work, I also had the opportunity to see, hear and film the engine for a short run, right from inside the bedroom with the cover off… what an awesome sight and sound! 🙂

2 thoughts on “Moving in and some maintenance issues”