Who would have thought it would be in Bakersfield?

My first impression of Bakersfield can be summed up in a scene from the show Friends, a scene that I watched just 2 nights ago in a La Quinta that I’m staying in with Chris and the cats (we’ve been staying here for several days while waiting for the shop to finish the paint job on the back end of our motorhome *gasps for breath*; see previous posts for details).

The scene goes like this: engaged couple Chandler and Monica go to Las Vegas to see Chandler’s transsexual father perform in a drag show/men’s review (as ‘Helena Handbasket’). As part of the performance, ‘Helena’ moves out into the audience and has playful banter with them. She approaches one man and asked where he’s from. “Bakersfield”, he replies. “I’m sorry,” she says, after which he repeats himself: “Bakersfield.” “No, no I heard.  I’m just sorry.”, she deadpans. Get it?

Yes, I must admit, that’s how I felt when Chris and I first started driving around this city (though it’s more of a ‘small town’ feel). It’s spread out, with a lot of trucking, factory and construction yards. It also can be downright ugly; one’s view being either dirt, metal, or concrete. Looking pretty down-an’-out in some places, I had to wonder if we’d be mugged if we walked around.

But upon further investigation, parts of it are incredibly cool, cute and artsy at the same time. As a matter of fact, I would go so far as to say that Bakersfield is having a comeback of sorts!  Chris says to just “Look between the ugliness; everywhere there’s pockets of cuteness”. 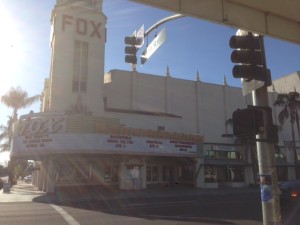 the funkiest Natural History museum that I Ever Did See (I’ll have to go inside next time), 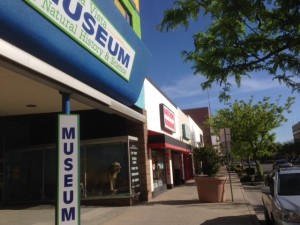 I mean, L.A. has got nothing on this coffee house. It’s hard to describe, and I think can only be experienced—but somehow, these random good-looking and well-dressed uber-hipsters.  They were so on another level that ‘hipster’ needs to be updated somehow…perhaps ur-bohip-sters (‘ur’ for urban/uber, ‘bo’ for bohemian, and ‘hipster’ for, well y’know. Or hipsturbo. I like that. They were all kinds of hipsturbo, with their clothes and hair and glasses and overall energy.

I wanted to take pictures, I did! But I was too nervous—how do I do it? Do I just walk up and ask individual / groups of people, “Can I take your picture”? Do I locate/ask the owner or manager of the place to take pics?

I took the easy way out, and took a couple of blurry pics on the sly. Of people’s backs. 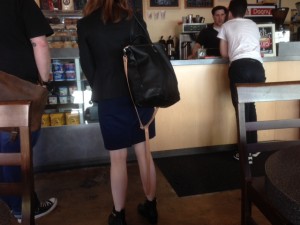 Doesn’t do the scene justice. 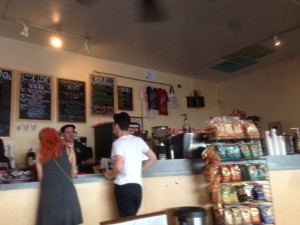 Then, on the way back to the hotel, we stopped at a gas station/liquor store for gas. So dive-y looking, but it housed a 5-star Mexican cafe inside, and at one of the gas pumps was this awesome car, with its awesome-by-proxy owner! 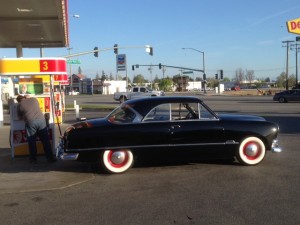 Overall, Bakersfield is a bit of an enigma.   Somewhat hip and edgy, while also a bit seedy and somewhat ‘on the wrong side of tracks’.  Still, though–my feel is that the city is pulling itself up again, scrappy as it is.

And simmering with a palpable energy.