Tracy: It’s been an interesting couple of weeks here at The Cruisin’ Crew. Yes, we had a great

visit with family in CO, but while leaving Standley Lake RV Park we ‘brushed’ against one of the boulders bordering the spaces (RV’er, beware!). Fortunately, it’s relatively small, but it still huuuuuuuurt; Mel (our motorhome) is essentially part of our crew!

Chris: I think over the last few months I had gotten a bit too comfortable maneuvering our massive motorhome around smallish campground roads, but I was ill-prepared for Standley 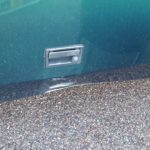 Lake’s low boulders, which just did not show up in my mirrors. I also didn’t even feel anything, because of the engine noise and because the bay door that met the boulder was just no match in terms of weight of material and the power of our 300 horsepower high torque diesel engine. Still, it could have been worse… the door is pretty banged up, but still closes and the damage is only on that one door (a few inches over and 2 doors would have been toast!;). We’ll get it fixed eventually.

Tracy: So then, when traveling to the Albuquerque Balloon Fiesta, we had a scary situation on the highway. Our motorhome wouldn’t respond to the accelerator, and the engine died (we later learned that we ran out of diesel on the side of the highway–such a rookie mistake, right? But it didn’t happen because we were stupid, we were just operating under incorrect assumptions).

Chris: I would say this could be embarrassing, but there are good reasons why it happened. We knew that the fuel gauge was not working correctly when we bought the motorhome, which is difficult to fix on a 19+ year old motorhome whose manufacturer is no longer in business. So we decided early on to always fill up to full and calculate our mileage and fuel consumption to know roughly how much fuel is left. However, after the breakdown I realized that I had worked with the wrong numbers for a while. The tank according to the manual has 105 gallons capacity, but after the breakdown (when we knew the tank was totally empty) we were only able to fill in about 88 gallons! So my original calculation had 17 more gallons reserve (a good 100+ miles range in my mind) than the actual usable fuel.

(Crazy fact: We actually ran out about 8 miles from the truck stop where I had planned to fill up, which amounts to just over 1 gallon of diesel! At least now we know better how to calculate our range with the correct numbers and we also fill up even earlier, just to be sure.)

Now the other problem with a big diesel engine is that you can’t just fill in some fuel and get it going again.  It needs to be primed and all the fuel lines air free, which can be tricky. On top of it (even though we had a hunch that it could have been fuel starvation) we didn’t know at the time if there wasn’t something else seriously wrong with the engine, so we realized that we needed to be towed off the freeway to a diesel mechanic. 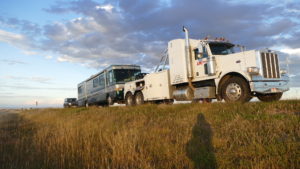 Lucky us, I had actually gotten a breakdown insurance (Coach-Net) that covered our tow, which otherwise would have cost us a small fortune on a Sunday afternoon with a 25000 pound motorhome. We had to wait 2 days for an appointment, but fortunately there was actually a Caterpillar (our engine manufacturer) service station right in Pueblo (the awesome staff at Wagner Equipment got us moving again in no time). Back on the road, we made up the time by only staying overnight and moving on instead of our usual 2-3 night stops and still made it to the last 3 days of the famous Albuquerque Balloon Fiesta!

Tracy: The Fiesta was very cool (literally and figuratively!), and I’m glad we went. Unfortunately, the weather turned rainy—we only got to see about 1/3 of the balloons launch on Saturday morning.  Because we spontaneously decided to go, we were only able to attend the tail-end of it–next time, we want to be sure to book a spot at one of the RV lots located right at the festival!

Chris: I learned about this event from another couple of full-time RV’ers who go by the name of “Less Junk, More Journey” and since it was on the way to our winter destination in Arizona, I thought it would be nice to check it out and possibly meet (which did work out, it was great meeting them!).

And now “Running Into Something Again” – Ouch! 😉

Tracy:  Yes, this time it was Chris, and not the coach!  As we were traveling in our toad (towed) vehicle to explore a local site (an ‘Ice Cave’-this collapsed lava tube/ground hole that maintains at 31 degrees year-round), we stopped at a Native American trading post.  We parked on the back side of the store, and as we walked around the building, Chris smacked his head right into one of their hanging signs…on the corner of it, too!  It left him quite dazed.

Chris: That was painful and I was immediately worried that it would start to bleed, but instead there was strong swelling around the site of impact. I had hit exactly the pointy edge of the wooden sign with the left side of my forehead. Otherwise I felt fine, but the swelling concerned me. Luckily one of the store owners brought us some ice in a ziploc bag to cool the bump which helped, but we decided to have it checked out at the local hospital just in case. The doctor there also erred on the side of caution and ordered a CT scan of my head, just to be sure. Turns out my noggin is fine, just a bit bruised and painful on the outside… 😉 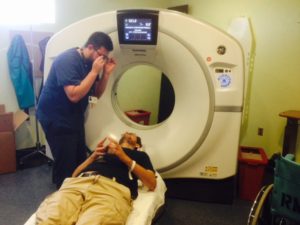 Tracy:  So no “Ice Cave” for us!  Instead, Chris experienced an ice bag and a cool Star-Trek like experience getting his brain scanned.  Hopefully, that is it for now, as these things tend to run in threes!!

One thought on “Running Into, Running Out Of, and Running Into Something Again!”