We did it–another Burning Man has passed and we had a blast. At times, a blast of dust, that is! 😉

But the magic of Black Rock City and the playa has again left its mark in our memories.

Before we could even drive out to the desert, we had some serious business to attend to and that was boarding part of our crew (the cats) and our plants. They’re not allowed at Burning Man and they would also not have enjoyed the experience as we did. We found a great place for them.

Tracy:  It was the Cozy Cattery, located outside Reno.  Totally cute and well-run.  We rented them a room that had large windows for them to look out, and Susan (the owner) took a lot of care in hearing our concerns about Booie (our senior cat–16 yrs. old is his estimated age), and it showed–the cats returned pretty well-adjusted, which speaks for itself.  And we left our house plants with a pet-sitter we found on craigslist.org, and she did a very good job, too–even giving them extra plant nutrients!

And so we were able to focus on getting there, which required forethought and research (Thanks, hon!).

Chris: The dust was a major challenge and we were lucky to have the motorhome as a shelter when it got really bad. But first we had to drive in, which was for the most part stress- 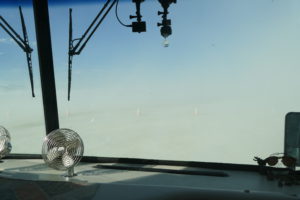 free, since we decided to go on Tuesday, after the rush of early arrivals had passed. But then we got stuck on gate road for hours because of white-out conditions.

Tracy:  In line, we saw a guy climb on top of his car and practice spinning a fire twirl-thing (though it wasn’t lit; it still looked pretty cool).  Another guy join 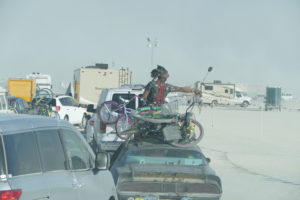 ed him, and then someone with a drum, and before you know it, it was a happening gathering.  I broke out my djembe and joined in the fun, ‘cause, y’know, Burning Man! 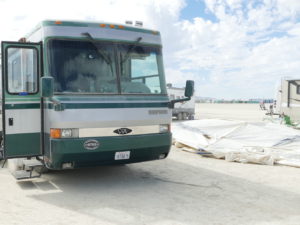 Chris: When the gates finally reopened it was close to nighttime and finding a spot in near darkness was another challenge, particularly with an almost 40 feet long vehicle. But after a short search, we did find a suitable spot, with the help of our new neighbors of the next few days. They pointed out that another group had abandoned the spot after trying to set up a badly designed shade structure (leaving it there) and helped to move the large mess aside to make room for our rig. We actually ultimately did cut some of this trash (Burners refer to it as “moop” or matter out of place) into smaller pieces and took with us as much as possible, as good Black Rock City citizens often do. Nevertheless it’s shameful that this unknown group left this mess for others to clean up.

Even with all the challenges, this year at Burning man turned out to be another magical experience, in many ways different than the other years but also familiar at times. It’s hard to describe if you have not been there yourself yet.

Taking our “home on wheels” to Burning Man required special preparation because of the dust out there, which is a fine alkaline sand, as the playa is essentially a salt flat of an old dried out lake. We already had experience with the dust from previous visits, but that was only tent camping and the vehicles (car and bicycles).
Taking the RV would be a totally different challenge: not only did we need to go in and out often, but a lot of our gear was packed inside the underbelly bays or basement. I had read that it’s a good idea to tape up any opening that is not used and we tried our best, but certain doors needed to stay accessible and thus could not be taped shut.
The second concern was the heat of the desert sun, which in my mind could cook us pretty well if we didn’t have a good plan on hand!  Our motorhome has 2 air condition units, but running them requires a lot of electricity and there’s no place to “plug into” out there. Of course for that reason the RV also has a generator build in, which is able to produce the needed juice to run the AC, but it runs on propane and I calculated that we had about 18 hours of fuel to run the generator. That meant about 3 hours daily for our stay.

I was still worried that there could be many more hours of uncomfortable heat, but we also figured we would not constantly stay in the RV. And I also researched passive cooling options: first of all, parking in the right direction–facing north, so that  the sun is not hitting that huge windshield. Another one was Aluminet, which I tied to the east side of the motorhome to shade the wall from the morning sun. That wall also has the refrigerator and keeping it shaded means it does not have to work so hard.

I was very impressed by the performance of the aluminet, which has a 70% shade rating, is light and wind resistant and caused the wall to be easily 10 degrees cooler than the parts of the wall that were directly exposed to the sun! I had thought about also installing more aluminet on the other side, but I could not find a good way to secure it (I have to figure that out in the future) and resorted to just cover the windows. For that I used Reflectix, which is another cheap and lightweight insulation material, that can be cut to whatever size is needed.

We taped everything with extra wide painters tape, which was adequate and easy to remove after the event (and without leaving any adhesive residue). Overall, these measures helped a lot to stay cool enough and we were also lucky that it wasn’t as hot weather as it could have been!. The dust was relentless though and we sat through quite a few drastic white outs where you could barely see the hand in front of you.

Tracy:  Another thing that we did was we washed and waxed the motorhome beforehand, and rinsed it afterward again.  This helped a lot with the overall cleaning process and protection on our outside.

Chris:  We’re still cleaning to this day and probably for a while… every time we think an area is fairly clean, we find another hidden spot that still has Playa dust. But overall the rig is looking and working well after the ordeal!

Tracy:  Stay tuned for more posts about Burning Man and our ongoing adventures!